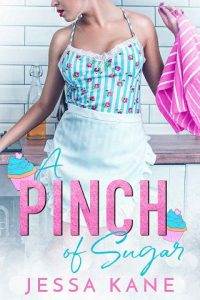 This is a nightmare, right?

I’m trapped inside of the worst dream of my life. That has to be it.

A man lowers a boom microphone over my head and I lift a hand to keep myself from being blinded by a huge, rolling light. Someone runs by and slaps a chef hat on my head, drawing raucous laughter from the audience behind me.

I can feel their amusement as they watch me and two other, unsuspecting members of the public get ambushed on a reality television baking show. At least, I think that’s what this is? When I woke up this morning, my boyfriend told me we were going on a tour of a movie studio.

None of it was true. He set me up.

I turn around and spy Clyde in the front row, laughing with two of his friends.

His grin says gotcha, and turning back around, I feel sick to my stomach.

A man in a flashy gold suit comes into view holding a skinny microphone, his smile bleached white. “Hello contestants! Or should I say victims?” The audience cackles behind me. “You’re probably wondering what you’re doing here dressed in an apron and chef’s hat. Well, I’m about to tell you!” He glides across the soundstage in front of an elevated platform with three empty chairs behind it. “You’re on a brand new reality show called…” He cups his hand around an ear and the whole crowd chants the next three words. “You’ve Been Ambushed! It’s the only live baking competition show where the contestants are nominated by their friends and family to compete in one challenging round of utter humiliation.”

I slowly realize there are cameras facing me from every angle. Not just me, though. To my left, there are two other victims at their own stations. A huge, bearded dude with tattoos snaking down his thick, muscular arms. He appears to be taking the whole situation in stride, his booming laugh echoing around the studio. On the other side of him is a beautiful redhead. Her lips are turned up in a flirtatious smile, but her cheeks are stained with pink.

“As I mentioned, we are live right now. Wave to the studio audience at home!” croons the host. My hands remain limp at my sides and the host clucks disapprovingly. “For today’s competition, you will bake us a three-tier red velvet cake! So much room for error, am I right?”

I zone out at that point, the host’s voice drowned out by the ringing in my ears. I can’t believe this is happening. It’s a running joke that I’m a terrible baker and normally I avoid it at all costs, but Clyde witnessed my ineptitude first hand. I’ve only been seeing Clyde for a couple of weeks and our first date was a bake sale fundraiser for his church, to which I contributed an absolute disaster of a pumpkin pie. Even the person who won the free pie didn’t want it.

I’m going to walk out.

There’s no way I can go through with this.

It’s one thing to have a church lady turn her nose up at my pie, but I draw the line at being humiliated on television.

The host has been busy interviewing the other two contestants, but he stops in front of my workstation now, beaming like the Ryan Seacrest from hell. “And here we have Alice, who has been nominated by her boyfriend, Clyde! Alice is a restaurant manager from Manhattan, New York and it’s a good thing her boss keeps her out of the kitchen, because she burns everything she touches.” I give him my signature dead-eyed stare perfected throughout years of riding the subway. “Is there anything you would like to say to the man who nominated you?”

“Yes, actually. There is.” I turn slightly to face my boyfriend in the audience where he is just basking in the attention. “Clyde? We’re over. Done. Caput.”

Clyde’s smug smile deflates and I turn to face the frozen host.

Panic cracks like lightning across his features when I start to remove my apron. “Uhhh. B-but…don’t you want to meet our celebrity judges first?”

“Um. First up!” Ignoring me, he keeps going. “All the way from jolly old England, this judge is the owner of three Michelin star restaurants and is known throughout the industry for his icy blue glare. Oooh. Please welcome baking master, Sebastian Cove!”

I stop cold, my hands stilling behind my back in the act of untying the strings of my apron. Did he really just say Sebastian Cove was a judge on this show?

My pounding heart shoots up into my mouth and I turn lightheaded.

For all my incompetence in the kitchen, I’ve lost countless hours of my life watching the experts bake on television. And I’ve always, always had an infatuation with Sebastian Cove. He has starred in my fantasies for years.