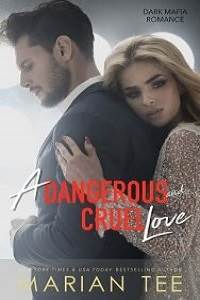 Everyone at the nurses station had a hard time not staring as a young, dark-haired man stepped out of the elevator, his gaze trained on his phone as his fingers moved swiftly on the screen. He was extremely attractive, with ebony black hair, brilliant green eyes, and beautifully chiseled features. Despite his young age, the stoic look on his face as well as the way he carried himself lent him an unusual air of maturity. Unlike most eighteen-year-old boys, he neither swaggered nor walked with a slouch. Instead, he was perfectly poised, his pace steady, and his every movement both graceful and correct.

For most people, Reid Chalkias’ singularly defining identity was that he was the son of two notorious criminals, and for them, the apple could never fall far from the tree. It did not help, of course, that despite how stylishly urbane he appeared, Reid also had an innate aura of dangerous strength about him. He might have only been with Cosa Nostra for the first eight years of his life, but it was more than enough to give him a raw, unpredictable edge that isolated him from the rest of humanity.

When it became obvious that Reid Chalkias was heading straight to their station, a silent but dead-serious flurry of activity ensued as the nurses competed among themselves on who could speak with him first. They elbowed and jabbed each other. all the while biting back cries and groans, none of them wanting the apple of their eye to realize that he was the prize they were fighting over.

Upon reaching the counter, Reid dropped the phone back into his pocket and looked up. “Good afternoon—-” He paused, momentarily disconcerted by the sight that greeted him. The nurse smiling at him possessed hair that strongly resembled a bird’s nest, and if he wasn’t mistaken, the top button of her uniform also appeared to have been torn off. Even more astonishingly, all the other nurses appeared in the same state, which led him to ask slowly, “Is everything alright?”

Those green eyes could make a girl do anything, she thought wistfully. For this beautiful young man, she wouldn’t mind risking her job and coming on to him. And she probably would have – if she hadn’t been aware of the purpose of his visit.

But the problem was, she and the other nurses did know why he was here, and only the most insensitive woman would have made a move on someone whose girlfriend had been kidnapped and nearly beaten to death.

Taking a deep breath in an effort to control her racing pulse, she fought to keep her voice level as she asked, “May I help you, sir?”

“May I have your name, sir?” As she spoke, Pia belatedly tucked loose locks behind her ear, which were an inevitable result of hair-pulling tactics.

“Thank you, sir. Please give me a moment to check the list for approved visitors.” Taking out the list, Pia pretended to scan it for a few moments before looking up with a smile. “Ms. Durham is in Room 1214, sir.”

Pia saw a brief smile touch his lips as he spoke, and the unexpected sight had her wetting her suddenly dry lips. Oh God, what she’d give just to have a taste of this man’s kiss!

Injecting a note of sympathy in her voice, she said huskily, “Please let me know if there’s anything I can do.” Like fuck you, she thought, or let myself be fucked by you. Either was fine. She really wasn’t choosy.

Pia watched Reid turn and walk down the hallway, a look of smiling triumph replacing the sham concern on her face. Turning to the other nurses, she blew them a kiss, saying tauntingly, “Better luck next time, girls.”

All the lights were off when Reid entered Room 1412, and the only sound in the room was the beeps of the heartbeat monitor. As he stepped inside, the girl on the bed immediately turned towards him, her plain-looking face lighting up at the sight of him.