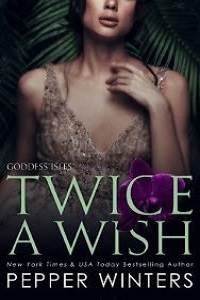 In one beat, it could be ruthlessly cold, cavernously deep, and protective of its secrets, yet in the next, it could be blissfully warm, wondrously calm, and piercingly clear.

That was my heart.

A complex ecosystem of darkness and light.

But if I were the sea, then Sullivan Sinclair was the shark.

Sleek and sensual, effortless and cruel, he was the predator of the ocean, all while I was the keeper of his livelihood. Not only was I his goddess, to rent and pawn, to earn untold treasures from her flesh, but I also harboured his secrets and buried his truths in my bottomless heart.

Without me, he’d just swim in sunshine and shadow, prowling and patrolling, hunting and surviving, his lifetime a monotonous replay of the day before.

But the sea wasn’t monotonous.

Each day was different.

Tempest and full of storms in the morning.

Crystal-spangled and serene in the afternoon.

That was my heart.

That was the breadth of my emotions when it came to the man who bought me.

The crevices and cracks were the veins surrounding the stubborn muscle keeping me alive. The brine was my blood hish-hishing through those veins, granting me strength to keep surviving.

Not because I had to win, but because of the tiny crumbs I collected about the god who’d captured me. His ability to hide a thousand shipwrecks was almost as impressive as the sea’s capacity to house a million creatures.

Sully Sinclair said I had the power to ruin him.

Something bound us that we couldn’t explain.

But that wouldn’t be what would destroy him.

A tidal wave of injustice and anger, of loneliness and lust was cresting in my heart. Sweeping along the shallows, stirring up the shadows, ensuring I wasn’t just a droplet caught in a bottle but an entire tsunami just on the horizon.

I had the power to ruin him, yes.

But in the process, I would also destroy myself.

I CARRIED HER FROM the VR Room as gently as I dared.

I tripped under her weight, my own muscles wrung ragged from the punishment I’d delivered while Eleanor was in Euphoria. My heart barely had enough energy to pump blood through my veins, my legs burned with lactic acid, my entire body squeezed dry of every life-giving molecule.

But fuck, it was worth it.

Worth it to feel somewhat sane after the nightmarish confusion of the past week. Worth it to finally find calm in the chaos that this dangerous goddess had caused.

I looked at Eleanor, fast asleep and limp in my arms. Her lips were parted and still red from a thousand kisses. Her cheeks still flushed from untold orgasms. Her skin glowing from within, thanks to the magic of what she’d indulged in.

Euphoria had the power to break you apart, but it also had the potential to make you rise from the ashes that you once were. Whatever parts were destroyed while she played in the fantasy, coded and delivered by yours truly, I had no doubt she’d awake stronger, bolder, and far more dangerous than before.

My fingers dug into her silky skin, pressing her close.

Fuck, I was in trouble.

But for the first time…I owned it.

I’d made yet another colossal mistake…and this one, I honestly didn’t know if I could survive.

“Who are you?” I whispered in the darkness, ignoring the trembles of my body, the hunger in my belly, the exhaustion in my mind. Every inch of me begged to rest. To place Eleanor on the sandy pathway and curl up beside her.

To sleep after surviving a night we’d both never forget…for entirely different reasons.

Stumbling forward, I groaned at the shooting stitch in my stomach. I’d overdone it. I’d drained myself to the point of sickness. I needed rest. She needed rest.

But…just for a moment—a single, stupid moment—with no one around and no one to witness, I stopped, let down my shields, and stared. I stared at the girl who’d twisted me up just by existing. The girl who I still didn’t know what to do with. Could I keep her on my shores for four years? Could I rent her out to men who didn’t deserve her? Would I have the strength to keep my distance when parts of me that I’d killed years ago were slowly waking up?

It wasn’t just her beauty that arrested me. It wasn’t just her temper or her personal choices. Something I couldn’t explain bound us together, drawing us closer, against our will…creating a minefield of destruction.

Her forehead furrowed a little as whatever dream she had ghosted over her face. She shifted in my arms, curling deeper into my chest.

And fuck if my heart didn’t kick with an extra beat.

Tightening my grip on her, I continued walking, digging bare feet into soft sand, forcing a body that had well and truly been abused to keep going, for just a little while.