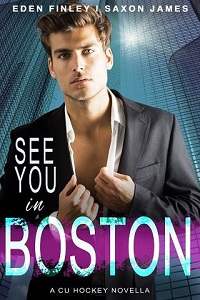 My body hums as I look over the crowded backyard, wondering whose dick I’m going to be bouncing on later tonight. Assuming I don’t strike out for the thousandth time this year.

I have a good vantage point from this balcony, and it’s not a complete stretch to think there’s going to be a queer man here who’s interested, given there’d have to be close to a hundred people down there.

I’m an optimist. And I’m determined to find the man who will finally deflower my perky flower at this graduation party.

The hosts, Beck and Jacobs, are renting an apartment in Colchester that’s actually a converted garage on some rando’s farm. It reminds me of a barn with the dark red cladding and white trim. The open living area is small with a galley kitchen you walk through to get out here, but they have their own large yard that’s sectioned off from the rest of the land, and it’s perfect for a night like this.

I turn as my friend Seth approaches and holds out a drink for me. He and his boyfriend moved to Montreal last summer, but they made the trip back to Vermont to see some of their friends graduate. I invited myself along for the fun. Just like old times. The CU guys are so different from the ones at UVM, and I used to constantly beg Seth to come to CU hockey parties with me because his twin brother was on the team.

Seth and I met at UVM when he joined the LGBTQ union … as an ally. Little baby demi bi didn’t know he was one of us until he met Richie Cohen.

Richie trails behind Seth, deep in conversation with Jacobs and Beck, and I let my gaze rake over the three men, all tall, broad, and so goddamn hot. I’m definitely in CU hockey country, and I’m just waiting for my knight with shining sex toys to sweep me off my feet and fill me up any and every which way.

I sigh dramatically. “He’s so pretty though. They all are. Do you think if I asked the other two nicely, they’d consider making a Tyson sandwich?”

“Fat chance.” Seth turns to one of them. “Hey, Jacobs, do you share Beck?”

Jacobs scowls and loops his arm around Beck’s waist. “If the guy in question wants his cock forcefully removed from his body, then sure.”

Beck laughs. “Your idea of foreplay is hot.”

“Why do you ask?” Jacobs says. “You and Cohen thinking of spicing things up?”

“Hell no.” Seth points to me, completely selling me out, the asshole. “My friend is on the hunt.”

“Might I suggest someone single.” Jacobs’s dark stare passes over me, and while I’m sure it’s supposed to be menacing, my dick doesn’t take it that way.

But as hot as I find these three, I don’t want to be pissing off any testosterone-filled ex-hockey players. “Relax, that’s the plan. Please take pity on me and point me in the direction of someone single and queer?”

“Human.” That’s really the only stipulation. It’s never been some big secret to me that I’m bi, because for as long as I can remember, I’ve always found people in general attractive. Tall? Hot. Short? Sexy. Chubby? Let me snuggle you. Skinny? Snuggle me. Men, women, enby, dear God I want it all. “I’m feeling like a guy tonight though.”

It’s exceptionally hard not to be a walking, bi stereotype, when all I want is to sample every beautiful person put on God’s green earth.

And while I currently want to be in a slutting-it-up stage of my life, things have been … difficult. I broke up with my long-term girlfriend junior year of college, and since then, I’ve either been busy with coursework or spending breaks at my childhood home. Telling my parents I’m heading out to get dicked down … not something they need to know.

I’ve topped all kinds of people, but what I really want is to find someone who can fuck me so hard I forget my last name.

I thought I’d tick off all the fun experiences in college, but now that I’ve graduated, it’s suddenly hitting me that I’m almost out of time. I leave Burlington for my new job in Boston in two weeks’ time, and I’m determined for that to be the point I grow up. Mostly.