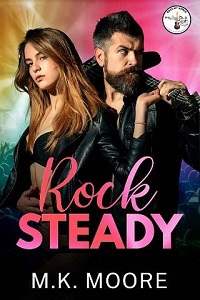 “We are Savage Plight. Thank you and good night, Tampa,” I shout after the final chord of our song “Narcissist Reject” is finished. The thunderous applause from the concertgoers reaches an epic loudness in the venue. Their hockey team plays here. For years, I’ve watched them on TV. I never thought I’d be playing in a sold-out show in this arena. My life has changed so much over the last year, I honestly haven’t had a moment to catch my breath. Our final song at the final stop of our nationwide tour, Savage Plight Right Now, is done and I get to home. My best friends and I started the band when we were still in high school. Billy, Dave, Neil, and I practiced in my garage nights and weekends for four years before we started playing gigs. The first few were freebies, but then we got a good rep in Westchester and took the band to Manhattan.

For nine years, we played innocuous places like the bowling alley and local bars, but last year, my brother, Aric, hired us to write and perform a song for the soundtrack of his award-winning movie, Plain Jane. “Beauty Within” won music and movie awards and skyrocketed us to fame. We rushed an album out and it went platinum pretty quickly. We went on tour with new backup singers, which was an epic mistake. Billy couldn’t keep it in his pants and almost ruined the band over throwaway pussy. He went around and around with those three girls for months, somehow managing to keep it a secret, until one of them spilled the beans. The fallout was epic, and we barely managed to hold it together. We made a vow to never do something again, especially for a one and done. We did the last six shows without backup singers. I have to hire new ones as soon as we get home but after six months on the road, I want to sleep in my own bed just once before I dive into band stuff. While I am not a saint, I have never and will never sleep with a groupie so, it’s been a while since I’ve been with a woman.

Jesus… Maybe more than that.

I’ve been too busy to notice or to care.

“That was epic,” Billy says as we rush off the stage. Two encores was enough.

“The whole damn thing was. I can’t wait to get back into the studio. I’ve been working on a couple new songs,” Dave says. We share song writing duties. It keeps things amicable. We have a rule that if someone writes a song, we learn it and perform it.

“Damn, man. Good for you. Paula said the label has some auditions lined up for backup singers starting tomorrow afternoon.”

“If it’s alright, I’ll let you handle that. I trust you. Hannah wants to spend a week together in bed and I am not turning her down,” Dave says. Hannah is his wife. They met about six years ago and have been together ever since. It was love at first sight for them, but I don’t know if I believe in that.

In the six months that I’ve been gone, I’ve missed a lot with my family. We are a close-knit group. First, I missed my parent’s anniversary party, then my twin brother got married and I missed it. To be fair, no one went to Aric and Ariana’s wedding but them, but still. That was another whirlwind romance. They got married after knowing each other only three weeks. So now I have a heavily pregnant sister-in-law whom I’ve never met, except over video chat. Personally, I can’t even imagine every being so obsessed with someone that I can’t wait a normal amount of time to marry them. The more I think about it, the more it boggles my mind.

I traveled light and opted to fly home to New York. In another life, I was working full time for my family’s production company, Holbrook Entertainment, but I haven’t in six long months. I don’t know if I can go back to what I was doing before. Scouting filming locations wasn’t fun for me. I already know that I won’t be going back to that. Now that I’ve tasted the dream, I can’t. I don’t have it in me. As soon as I land in New York, my phone rings.

“I am,” I reply, chuckling. Her momdar works great. It’s scary.

“Dinner is in forty-five minutes. See you soon,” she says before hanging up.

My stomach growls at the thought of real food.

I take a cab to my parent’s high-rise apartment and let myself in. I’ll be staying with them for a for a few days. My building’s got a rodent problem, and they needed all the tenants out, so pest control can do their thing. But this is New York even the richest homes have rodents.