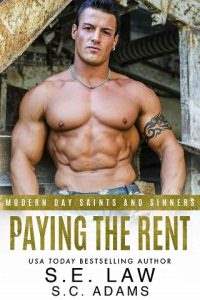 The oppressive Nevada heat hits me in the face as I climb out of my car. I suppose it could be worse because in certain areas of the world, the heat is muggy in addition to being extreme. But here, the air is dry and I feel like I’m walking around in a toaster oven. Which is an apt description of the desert, come to think of it. Or maybe an air fryer. Yeah, that seems right on the money.

As beads of sweat form at my temples, I trudge up to the front door, cursing the heavy work boots on my feet. What the fuck was I thinking? Once a firefighter, always a firefighter, I guess, even if I don’t put out fires anymore. Hell, at my new job, I barely even wear clothes because I’m part of a male revue called Thunder Strike. Yeah, I’m a male stripper now, and it works for me.

But I have today off, and my buddy Randy pulls the front door open before I get a chance to knock.

“Yo, I heard your truck coming from a mile away. Come on out back. Samantha and Henry are sitting by the pool already.”

I clap my buddy on the back and follow him through the house and out to the backyard. I whistle because the house is a stucco two-story with an in-ground pool, jacuzzi and cabana in the expansive backyard. Randy and Samantha have set it up nicely with lounge chairs and even a pergola over our heads to shade guests from the unrelenting sun.

“Hi Jethro,” Samantha greets, getting up to kiss me on the cheek. “It’s a little hot today,” she acknowledges.

I sit down and pretend wipe at the sweat on my brow, sighing dramatically.

At that, Randy and Sam’s son Henry giggles and looks at me from his high chair. He’s not talking yet, but he’s adorable with his pudgy cheeks and big blue eyes. Aww, I’m such a sucker for kids, and I tickle the little boy’s chin.

“He’s in sleep regression, so we’re all a bit exhausted, but it’s not too bad. Things could be worse,” she says in a rueful tone. But then she brightens. “How’s his favorite uncle? How are you liking Vegas?”

“I’m not in sleep regression, but I’m still exhausted because Thunder Strike hours are nocturnal, so it’s hard to get enough sleep.”

Randy laughs. “I get that, but hey, it’s part of the life. Ladies like to party at night, so it’s not exactly a nine-to-five job.”

I grimace a bit.

“Yeah, I should have expected that. But so far so good. It’s a different life, but I like it.”

“You’ll get used to the nocturnal schedule. It took me a while, but I did and now it’s easy,” he shrugs.

Sam nods, leaning forward with a mischievous look in her eye.

“Besides, I hear the girls like you,” she coos. “Actually, we heard that they love you.”

“That’s good to know, especially since I just started. But it’s hard work. It’s not easy getting up on stage under those hot lights while gyrating like a motherfucker. People discount it, but it ain’t easy.”

Then we all laugh because this is a career choice we’ve made. Randy and I used to be firefighters back in Jersey, but my friend was expelled from the department after nude playing cards of him got out. It’s a long story, but he ended up moving out to Vegas to be a dancer, and his girlfriend Sam (now his wife) came too. They seem to have settled in, and it’s a nice life. Even more, they convinced me to give it a try as well, so I also quit the fire department and settled in the desert.

But then I get a pensive look.

“You know, I doubt that the Cedar Toms Fire Department is all that happy with us for quitting,” I say in a rueful tone. “Have you kept up with them? I haven’t talked to anyone since I moved, but they lost two of their guys within six months of each other. That’s you and me, bud.”

“Yo, you quit, but they fired me, so no, I don’t keep in touch. In fact, they can go fuck themselves for all I care.”

Sam slides her hand onto her husband’s knee.

“I’m not worried, but I don’t have any sympathy for those fuckers either.”

“Yeah, it was kind of a bad look for them, as well as us. Well, it’s all water under the bridge now. They can fuck their annual calendar too. So what if Mr. January and Mr. February don’t even work at the Cedar Toms FD anymore?” I grin. “That’s their problem.”