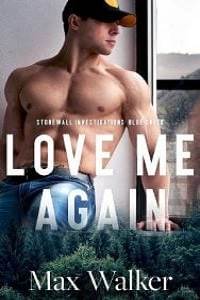 Small towns were always my shit. I loved them. I wore an easy smile as I walked up to the brick-faced and ivy-covered building that would be the home for Stonewall’s new offices. The spring sun shone brightly on the pavement, drying it up from the sprinkling a couple of lazy gray clouds had dumped. Squirrels clattered up a nearby tree as I walked past, carrying a box labeled “Office Supplies.” There was a kind of magic to tiny places with the same handful of faces waving “good morning” and “good evening,” and I was happy to be back in it. I would have likely stayed in Blue Creek, New Hampshire, my entire life, finding the rhythm of this town as comforting as being back in the womb. It wasn’t the place I was born and raised, but it was the town that had formed me into the man I was today, and at one point I had found myself thinking I’d stay here forever.

Things didn’t work out that way, though. After a tumultuous time in my early twenties, I ended up leaving this picturesque town for a different kind of city beat: NYC.

Not many people waved at you in the city, and if they did, it was because you either dropped your wallet or they had a petition that needed to be signed. Still, I loved the city just as much as I loved Blue Creek. I found a special kind of magic in both.

I also found a special kind of soul in the city. He had made every day special, every day even more magical than the last. I fell in love, feeling like I had finally found my other half after losing one once before. I didn’t ever want to let Dean go. That thought had been the driving force behind me buying a ring; I wanted to tie us together for the rest of our lives.

Unfortunately, only a part of my wish came true.

Dean had been with me for his entire life, but only because his life had been cut tragically short. A hit-and-run. From one minute to the next, my world had collapsed in on itself. The call had implanted a black hole directly inside my chest. My days had become as dark as my midnights, darker even. I couldn’t laugh at even the funniest joke, and my conversations had all been clipped down to three-word replies. Grief consumed me. Ate me alive. Sucked away all the magic I had thought was permanently mine.

So I ran. Same way I ran from Blue Creek, I ran from New York. I couldn’t get on a train or walk past a park or down any city street without conjuring up a memory of Dean and me. The ghosts followed me everywhere I went.

When Zane Holden, the founder of Stonewall Investigations, told me he wanted to expand into smaller towns, I jumped at the chance, offering my childhood home as an option. Zane didn’t take longer than a few hours to agree, and by the next week, I had my bags packed and my apartment keys turned in.

Which was how I ended up back in Blue Creek, standing in front of Barks, Birds, and Booze with the Stonewall Investigations sign added just above it. The pet store had been here since I was a kid, but the addition of an alcohol section must have been new.

Darien Bay popped up next to me, smiling and holding a box of his own. He’d worked at the New York offices as Zane’s assistant before Zane gave him the offer to come and manage the new office. He was hesitant about moving away from the city; he’d been born and raised in the Bronx, but after a short visit and plenty of reassurances from me, he decided to take the leap. I completely understood his concern as a Black gay guy moving into a town that had a similar population as six city blocks, but I promised him that he’d find no trouble with the people in Blue Creek. The town prided itself in how welcoming it was, even being reflected in the town’s slogan: “Blue Creek: A town for everyone, by everyone.”

And if anyone did give Darien shit, then they’d be answering to my fist.

“I’m good,” I said, nodding toward the building. “Little different than the Stonewall on Eleventh and Waverly, huh?” Our offices were located on the second floor of the pet store. There were stairs on the outside of the building that led up to an entrance, but I enjoyed walking through the pet store, where another set of stairs could be found. I’d already made friends with the spicy manager, Shelly, and her even spicier cockatoo, Houston.

“Just a little bit,” Darien said with a laugh. “I’m loving it, though. Honestly more than I thought I would. I’ve already hiked about ten different trails.”