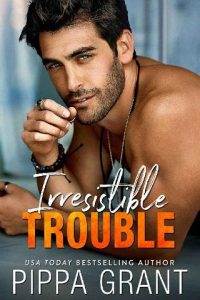 I, Cooper Rock, baseball god, worshipper of women, hometown hero, beloved son and brother, and owner of a well-deserved ego, have always reached for the stars. Usually in baseball.

In love? Nah. When you’ve played the field as much as I have and haven’t been bit by the bug, you’re immune.

Or so I thought until she walked back into my life.

But I have been hit by the Waverly Sweet tour bus of love, tumbled head over heels, and come up in a field of Waverly-scented roses. This is it. She’s my one and only, and this time, I won’t screw it up.

I’m cleaning up my reputation. I’m ignoring the doubters. I’m channeling everything I have into proving to her that I can be the man she deserves.

No matter what else I have to sacrifice for love.

Irresistible Trouble is a hilarious home run of a romcom about a baseball player whose ego is catching up to him, a pop star who’s a bit of a hot mess when the cameras aren’t looking (and sometimes when they are), and the kind of family and teammates that everyone deserves… in small doses. While this laugh-out-loud romance stands alone with a sweet-swoony HEA, you won’t go wrong if you dive into the entire Fireballs series, starting with Jock Blocked, first. And for more Cooper Rock cameos, check out Master Baker (a standalone featuring Cooper’s brother) and the Bro Code series.

Waverly Sweet, aka a top pop queen who still can’t hold her nerves, especially when old flames are involved

There are butterflies in my stomach.

You’d think after this many years in the biz, nerves would be one of those things I’d have mastered, but there they are, whispering some of my unshakeable, ever-present fears.

What if you fall off the stage?

It’s been six months since you had anything close to a wardrobe malfunction—maybe tonight will be the night!

This would be a great show to forget the words to “Home Run” again like you did when you spotted you-know-who at the American Music Awards, wouldn’t it?

The Waverly Sweet: Honey and Sass tour, my eighth full tour, sixth as a headliner, started about a month ago. We’ve been on this tour long enough to fall into routines.

I shouldn’t be getting nervous.

Especially right now. I’m a pro. I’ve got this.

Thirty seconds ago, I was fine. But then, thirty seconds ago, I was posing for pictures with members of my Waverly’s Braverlies Fan Club at my normal backstage pre-show meet-and-greet. There’s nothing like meeting people who are more nervous than you are to make you put your own stress on the backburner while you assure them that yes, you’re a normal person like them, and yes, you honestly are thrilled to see them.

I genuinely am. I love my fans. I wouldn’t be here without them.

But when you put thirty or forty thousand of them together in an arena? Or even more in a stadium?

Crowds are a totally different beast.

It’s easier to apologize to a group of five people in a private setting for accidentally stepping on some toes while you get in position for a picture than it is to appease them if you get obviously out of rhythm with the backup dancers or forget the words to their favorite songs.

If I could only do meet-and-greets and skip the show portion, I would. In a heartbeat. But that’s not how this business works.

“Have a great time at the show,” I call to Sabrina and her parents as they exit the room.

Sabrina squeals and waves one last time as my security team subtly shuffles her out and closes the exit door.

And then chaos explodes all over the room.

It’s organized, streamlined chaos, but it’s still chaos, and I recognize this chaos.

I glance at the clock.

Under an hour until I’m on. Should I change my wardrobe?

Did we take “Gone Yesterday” out of the setlist for tonight?

I shoot a look at Hiramys, my lead assistant, who’s more harried than usual. She’s roughly fifteen years older than I am, with olive skin, dark curly hair that’s perpetually tied back in a bun, and a pantsuit wardrobe that never stops.

But despite tonight’s amazing pantsuit, I can tell something’s amiss.

“Trouble in the arena?” I ask Scott Two, a beefy, balding white guy in his late forties who is—you guessed it—the second guy named Scott on my security team.

He hands me my glittery pink water bottle as he points me toward the door behind the tour screen that we use for photos.

“No loose monkeys?” There you go, Waverly. Be ridiculous. It helps the butterflies.

“Secret nooky happening in a closet?”

“A diamond heist happening under our noses because no one told me I was the distraction?”