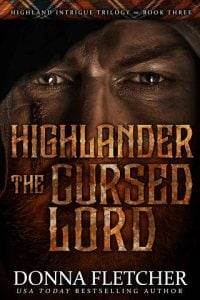 Bliss had forced herself to stop crying not long after she had left Clan Loudon. Tears would do her no good. She had to stay strong if she were to survive, and she would survive. She had to. She had to keep her sisters, Elysia and Annis, safe and see them wed to good men who would treat them well.

She prayed that Elysia had paid heed to her advice and gained the courage to ask Saber, a farmer of good strength and character, to marry her. He would keep her well protected. It made it easier that Elysia and Saber favored each other. That alone would be a good start to the marriage.

“It won’t be long now until we arrive.”

Bliss turned to Lawler, riding beside her. He had been kind to her the two days they had spent traveling. She had thought him of advanced years when first meeting him, his white hair a good indication of it and the few wrinkles attesting to it as well. But the sharpness of his blue eyes and the strength he’d displayed the last two days made her think he was of less years than she had first thought.

“You worry for your sisters, but there is no need. You struck a good bargain, and they will wed who they choose because of you,” Lawler said. “You are a wise and brave woman.”

“Some would argue otherwise since few if any would agree to wed the cursed lord,” Bliss said, recalling the bargain she had put forth to Lawler.

She would not only wed Lord Rannick, the worst cursed lord out of the three lords whose families had had a powerful curse cast upon them around twenty years ago, but she would need to get with child. It had been the only plausible solution to prevent a forced marriage of her sister Annis to Lord Brogan, the condemned lord. He was the one who death did not touch. She also had wanted to make certain Elysia would be able to wed a man of her choosing and not take a chance that she’d be forced to wed a man who would treat her badly, since she was such a sweet, kind soul. As long as Bliss could keep her sisters from harm, that was all that had mattered to her.

When Lawler failed to comment on her remark, she said, “Tell me Lord Rannick is not a bad man.”

Lawler’s body stiffened and his shoulders squared. “I will not lie to you. Lies will do you no good in this situation. Lord Rannick was once an honorable man. He made the most of his first marriage to Lady Cecilia that his father had arranged for him. He treated her well and when she got with child he was pleased and looked forward to the birth of their first bairn. He was devastated when they both died in childbirth. He did not wish to wed again, fearing the woman’s fate, but his father ignored his wishes and wed him to Phedra. They were married barely a few months when a riding accident claimed her life. He refused to wed after that and once again his father ignored his wishes. It was after a vicious fight with his father that Lord Rannick went to meet his new wife, three days after they’d been wed through proxy, and tell her that he would not consummate or commit to the marriage. He did not have a chance to say a word. She collapsed upon seeing him and he caught her in his arms, and there was where she died.”

“How horrible for him and those women,” Bliss said.

She was a healer and well understood that death struck unexpectedly in childbirth, accidents happened, but a young woman dying for no apparent or understandable reason made her wonder the cause of her sudden death.

“More horrible than you can imagine. Lord Rannick departed the clan not long after his wife was laid to rest. He traveled to foreign shores in search of a way to end the dreadful curse and in so doing—he lost his soul. His father sent men to bring him home and it took most all of them to capture him and forcibly restrain him to accomplish the task.”

“Lord Lochlann was shocked when he laid eyes on his son. His skin had deepened from the heat of the sun in some of the heathen lands he had traveled, and a scar on his cheek marred his once fine features. No one knows how he got it, he never speaks of it. Many believed he sought death, no longer wanting to live with the curse, but the curse refused him a reprieve. He’s doomed, as are his heirs to suffer the curse.” Lawler turned silent for a moment. “There is something I feel you should know, though I was ordered not to tell you. But I feel you have a right to know, to be prepared. Lord Rannick told his father that if he forced another wife on him,” —Lawler hesitated— “he would kill her and save her the trouble of whatever miserable death would surely befall her.”