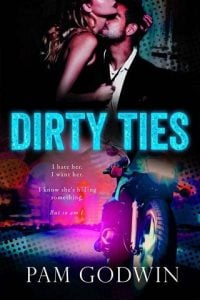 The ache between my legs throbbed, intensely and obsessively. Sometimes I didn’t think about him for hours, not the fluidity of his leather-wrapped body crouched on his sportbike or the strength of his hands around the grips. Often, I went an entire day without mentally tracing the muscle definition in his shoulders and thighs, imagining the flex of his ass, the thrust of his hips.

Today hadn’t been one of those days.

I’d tried to confine my thoughts to merger proposals, senior staffing issues, and all the other initiatives that demanded attention under my leadership. But he was always present, fighting and twisting and charging into my mind, riding on his steel horse, and carrying my body beyond the edge of restless desire.

Gah! Where was my damned dignity? I shut down the tablet displaying the new photos of him and returned it to my leather satchel. Who would’ve thought Chicago’s favorite criminal would be spotted at a grocery store? Somehow, it made him more human. The media seemed to agree, buzzing excitedly about his public appearance on local television and papers. I didn’t like that, didn’t like sharing him with four million women.

Outside the windows of the company car, the mammoth columns and well-lit awning of the Trump Tower drew closer. I shoved my aching feet into the heels, the phone pinned between my ear and shoulder. “When these pictures were snapped, was he caught off guard?” My insides fluttered with foolish hope. “Anyone see his face before he got away?”

The ruffle of papers scraped through the speaker, followed by my personal assistant’s husky, feminine voice. “Nope. He never removed the helmet.”

Always masked, much to my despair, as well as every woman, journalist, and cop in Chicago. Everyone wanted a piece of him.

Thanks to online gambling, the web of criminals profiting from the underground racing syndicate enticed corruption from all over the world—investors, mobsters, and racers alike—turning my Chicago into a hub of dirty money. And at the forefront of this underworld was the undefeated racer himself.

Maybe it was his anonymity that held the city so captivated. Or the inexplicable way he invited death at 185 mph on narrow, potholed streets. Two years ago, one of the reporters at my company had coined him Evader, and the moniker stuck. Should’ve been Invader, given his persistent intrusion into my fantasies and the subsequent wet spot cooling in my panties.

I squeezed my thighs together. A rough fuck from one of my husband’s hired playmates would be the second best way to spend the evening. The first being entwined with the notorious sportbike racer while straddling the vibrations of his inline-four engine.

The town car rolled to a stop, and I smoothed the skirt over my knees. “Did you send me the latest file?”

My standing order to receive those encrypted files was almost as risky as my appearances at Evader’s dangerous venues. But Jenna couldn’t open the files without the private key. She had no idea they contained the details for upcoming illegal races, information the police and media would love to get their hands on.

The file I was waiting on tonight held the map for the race that was starting in a few hours.

“Yes, Mrs. Baskel. Anything else?”

“That’ll be all.” I dropped the phone in my purse and grabbed the satchel.

The chauffeur opened my door. The din of honking and shouting carried me out, capturing me in the energy of the city. I vibrated with the rush of sensations, the scent of asphalt, the warm press of the evening wind, and the buzz of passing pedestrians, their voices rich in layered accents. At seven o’clock on a Thursday, the nightlife crush had just begun.

I strode the few paces to the dedicated entrance for residents of the Trump Tower, my heart beating with the pulse of traffic. Glass walls of modern architecture towered above, glimmering with the reflection of city lights. Behind those walls, people just like me accumulated millions of dollars through hard work, innovation, marriages…and lies.

While my own marriage was forged in deception, the heart of it resided in a deep friendship, nurtured by our families since birth. A smile twitched my cheeks. The stunning Italian genes Collin Anderson inherited from his mother were an added bonus.