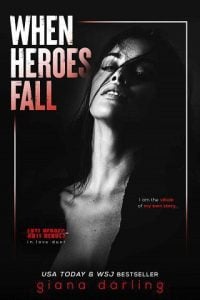 It started with a phone call.

“Elena,” my sister and best friend Cosima breathed into the phone, her voice stuttering like a failing engine. “I need you.”

I could still recall the feeling in my chest as I heard those words. The tightening in my heart like an emerging bud and the bloom as I relished the opportunity to finally pay my sister back for her years of sacrifice and support for our family, for me.

“Anything,” I’d promised instantly, an oath I would have sworn to her in blood.

That was before I knew why she needed me.

Or more aptly, who she needed me for.

If I’d known then, I wondered if even the genuine angst in my beloved sister’s voice could have swayed me into taking on this case.

I was a criminal lawyer, but I’d made a point to avoid representing anyone involved in organized crime even though Fields, Harding & Griffith, one of the top firms in the city, was relatively infamous for its list of rather unsavory clients.

Including the New York City Camorra.

Who had just made the front page of The New York Times for being arrested on suspicion of three counts under the RICO Act, including, but not limited to, murder.

The metallic hum of mechanisms unlocking startled me from my misgivings, and the guard indicated for me to follow him into the small holding cell where I was about to meet my future client.

Only, I’d met him before.

I could still remember the sheer size of his heavily muscled form bent over Cosima’s hospital bed, his swarthy features and olive-black eyes immediately alerting me to the presence of a southern Italian man. The look of that face, the set of the stubborn bones in his slightly dimpled square chin, and the roughly carved cheekbones taut with strain spoke to something even worse.

I had no idea why such a man was at my sister’s bedside, his face creased with acute misery, but I did not like it, and I did not trust it.

We’d left Naples to get away from men like that.

Even though Cosima had woken from her coma and sworn that Dante was a friend, I’d still cornered the big lug in the expensive suit outside in the hall, my hand fisted tight in his creased dress shirt.

“If I find out you had something to do with her getting shot,” I’d whisper-hissed at a man who could have easily crushed me with his bare hands. “I’ll shoot you myself.”

A man who was well-known in criminal circles as the Devil of NYC?

He only had the audacity to tip his head back and roar with deeply inappropriate laughter in the hallway of the hospital intensive care unit.

And now, there I was, about to face him again.

Not as his nemesis, though I still wanted to rake him over the coals for involving Cosima in any illegal and dangerous dealings.

But as his lawyer.

I sighed deeply before squaring my shoulders and following the guardsman into the cold, poorly lit cell at the Metropolitan Correctional Facility.

Dante Salvatore sat at the metal table with his thick legs chained to the floor and his hands bound and resting on the steel surface. He seemed unusually at ease wearing the ill-fitting hunter green jumpsuit in a cell that seemed almost hilariously small compared to his considerable bulk. It was as if the uncomfortable metal chair was his throne and this dank cell, his receiving hall.

“Ah,” he said in a low, muddled accent that was somehow British, American, and Italian all in one. “Elena Lombardi. I should have known she would send you.”

“Really?” I raised a cool eyebrow as I glided into the room, the click of my Louboutin heels echoing against the walls. “Then I suppose I’m more surprised to see myself here than you are.”

I tried not to look into his face as he flashed me a beguiling smile, afraid I’d see spots as if staring into the sun. It was no wonder this man had gotten away with murder before with a face and body as beautiful as his. I was sure he was able to charm himself out of most situations.

Well, he would find I was immune to his charm.

In fact, immune to men entirely after the last year of my heartbroken life.

I pulled my tablet from my Prada purse, then crossed my legs beneath the table, poised to take notes.

“Do you know why you’re here?” I began in the coolest, most professional voice I could muster.

Not a trace of my native land remained in my tone. I’d cut, washed, and bleached the foreignness out of my voice so that anyone first meeting me would never guess I was anything but American-born. It was the way I preferred it. And with my unusual dark red hair, it wasn’t as if I looked traditionally Italian either.