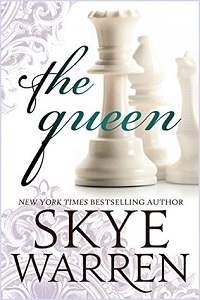 The winter air seeps into the cracks of my bones, the seams of my skin. There are a million places where my body has broken and reformed. A million times that I remember with each gust of wind.

Despite the temperature I have my coat open, my hands on the rail. Showing weakness isn’t an option. My heart would stop beating, my lungs would stop breathing before I shivered even once. Any hint of weakness was stamped out of me a long time ago.

The man who approaches me looks left and right. God, he’s a sitting duck if anyone wanted to shoot him. The very picture of weakness. His cheeks are ruddy, eyes red. His puffy coat must provide decent warmth, but still he rubs his hands together in his cheap knit gloves.

He comes to stand beside me, looking out over the water. “Some weather,” he says.

A sitting duck, but he’s under my protection now.

On the other side of this river is a college teaming with bright-eyed kids. Brightly colored banners decorate the staid green lawn. This far away I can’t read them, but I can guess what they say. Welcome to Orientation. Join the math club. Sign up for this sorority.

“Some weather,” I say, because I’m as much of a sitting duck as he is.

At least when it comes to this girl.

“I saw the dorm room,” the man offers. “Kind of small, but I guess that’s the way of it. Got her moved in okay. She didn’t have much stuff.”

Knit gloves rub together. “Right. Of course. And I’ll be doing some work for you, then?”

There are people on the perimeter of the makeshift game. Maybe some boys who want to watch the action. Some girls checking out the players. Is Penny among them? Does she see something she likes?

No, she wouldn’t be there. She would have found some library by now. Some quiet place to read.

“When you gamble again…” I say, letting the thought hang in the air.

This is a lie. Of course he will. “When you gamble again, I’m not going to kill you.”

“I understand,” he says hastily, probably assuming I’m implying some kind of torture.

“I’m not going to kill you, because for reasons beyond my comprehension, that girl gives a shit what happens to you. So you had better keep it that way, old man.”

He grasps the cold railing, leaning heavily on it. “I see. And what are your intentions with her?”

It feels strange to laugh in a real way. Not the kind of pretend amusement that I walk around with on a daily basis. This laugh shakes my whole body. “Are you really going to have the talk with me?”

He looks affronted. “I have a right to ask that question. She’s my daughter.”

“You have no rights. Not the right to breathe. To eat. To sleep. You can do nothing except what I let you do. That’s what happened when she lost the game. Your life became mine.”

“That’s not real,” he says, sputtering. “This isn’t the Dark Ages.”

“The Dark Ages. What a perfect description of the time we’re living in.”

“You can’t own another person.”

Then how does Penny have such a strong hold over me? Why do I worry about her with every inhale, hope for her happiness with every exhale?

If this isn’t ownership, I don’t know what it is.

He looks down at his hands, clearly puzzled. I’m puzzled as well. Where does a grown man get gloves that look like they belong to a preschooler? He works it out in his head—the risks of defying me, the cost of obeying me. In the end he slowly takes off the knit gloves and hands them to me.

I take them in my bare hands, hands that have been pressed in a vice and burned on a stove. Hands that have done unspeakable violence. “Where did you get these?”

“She gave them to me,” he says, his voice raw. “They were a Christmas present a few years ago.”

And cheap enough that he kept them all this time. If she got him anything worth enough to pawn, he would have already lost them. I examine them for a moment, feeling strangely detached. How would it feel to have something so warm? How it would feel to have something from her? She picked them out herself, paid for them with the pennies she made at the diner.