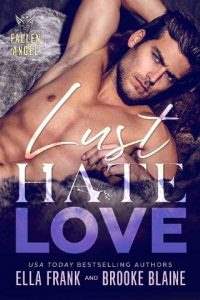 I TOOK IN a deep drag of my cigarette, and when I exhaled, the smoke formed a cloud that passed over the Atlanta skyline. Tequila buzzed in my veins, courtesy of Halo’s sister, Imogen, thrusting shots in my direction all night, quieting the voice in my head that told me what I was thinking was a bad idea.

Instead, I tried to focus on tonight’s success and being on top of the world. We’d just killed our first show on the Corruption tour, and if that was any indication of how the rest of the dates would go, we’d be flying high for months.

So yeah, I was feeling fucking good. But I could be feeling better…

My eyes drifted in the direction of Fallen Angel’s new manager. Levi Walker: an enigma wrapped up in a handsome package, one I’d tried not to notice, but lately, I had been failing miserably. It didn’t help that I’d noticed him watching me too when he thought I wasn’t looking. Charming, self-confident to the point of cocky (which, in this business, you had to be), and so strikingly good-looking that it was no wonder Levi seemed to get whatever he wanted. That was exactly the reason I’d wanted him to take us on as our manager, because he was a guy you didn’t say no to, which meant he’d be able to fling open doors for us.

And maybe a small part of why I’d been adamant about him replacing Brian had to do with the way he made my dick hard. Viper and I seemed to have that much in common when it came to new guys.

Levi looked up, his dark eyes meeting mine as I lounged against the wall, taking another inhale of nicotine. Damn, he looked delicious tonight. His blond hair swept across his forehead in the breeze, and he’d pushed up the sleeves of his turquoise button-down shirt, showing off his tanned arms. I’d never thought I had a type until the day I met Levi Walker. One look at him—combined with all that self-confidence—and I knew where this was headed.

He held my gaze until I exhaled, and when the smoke escaped my lips, Levi’s eyes dropped to my mouth.

My cock throbbed behind my jeans, the way he was watching my mouth making me rock hard in two seconds flat. When his gaze traveled down over my body, I groaned.

God, what the fuck was he waiting for? A sign? My permission? I was pretty sure my entire body was telling him exactly what I wanted, and from the way he wet his lips, I took that as a sign that we were on the same page.

But when Levi’s eyes met mine again, there was something unreadable there, and then he looked away, focusing back on the crowd of people around him.

Godfuckingdammit. I was beginning to think I’d have to spell this shit out for him. But it’d have to be later, because Viper and Halo were headed in my direction.

I bent one of my legs to rest on the back of the wall, hoping to hide my erection, as they came to a stop in front of me.

Ah, the lovebirds of Fallen Angel. If I didn’t like them so much, and if Halo hadn’t simmered Viper to a low boil, I’d probably gag at all the heart-eyes shit. But I couldn’t do that, and I found it impossible to resent either of them, not when Viper was happier than I’d ever seen him. And Halo had been good for him and for the band.

But right now, they both looked like they’d rather be anywhere but here, celebrating on the roof of the hotel with about a hundred others.

As I looked between the two of them, I smirked. “Lemme guess. You’re leaving.”

I brought the cigarette to my lips for another drag and then blew the smoke over my shoulder. “If I’m honest, I’m surprised you both lasted this long. I figured you would’ve split hours ago.”

Viper wrapped an arm around Halo’s shoulders and said, “If it’d been up to me—”

Halo whacked a palm on his chest. “I was being sociable.”

“I was being frustrated,” he said.

I laughed, but my eyes caught on Levi for the umpteenth time tonight. He’d moved to the opposite side of the party, chatting it up with a crowd surrounding him and hanging on his every word. I didn’t like the way one guy in particular was eyeing Levi like he had plans for them later, but I couldn’t think on that for long, because Viper looked in Levi’s direction and said, “Something you seem to be familiar with these days.”

“Huh?” I reluctantly tore my eyes away from Levi back to where Viper gave me one hell of a smug look.