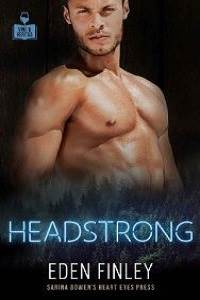 Walking to work is fun. Especially in the snow.

Almost as fun and exciting as being told it will cost six hundred bucks to get a new alternator for my piece-of-shit car.

Whoever said positive thinking is the key to happiness has to be talking about a new party drug.

Because this is bullshit.

I would have taken an Uber, but I’m running late and it’s quicker to walk the mile and a half from my apartment. I usually walk, but in this weather, it’s easier to drive. You know, when my car is working.

If it was light snowfall, that would be one thing, but no. It’s annoying sleet that hits me as it falls in pellets, stinging my face. I pull up my scarf, but it only helps a little.

My boots crunch the ice on the sidewalk as I trudge toward Church Street. I used to love the snow, the ice, and everything to do with winter. Now I crave summer.

Even though my shift at the bookstore started five minutes ago, I duck into the Maple Factory and order Harrison an apologetic tea and granola muffin. I grab an espresso to wake myself up and a hot chocolate to warm my frozen insides.

When I get to Vino and Veritas, I have my customer-service smile ready and flash it toward my boss.

He gives me a derisive look.

I grunt. “New problem this time.”

“You really need a new one.”

All is forgiven when I hand him his coffee and muffin.

“I’d get a new car if I didn’t spend my last five bucks on sucking up to my boss.” My smile is genuine this time, but it’s only because if I don’t smile, I’ll cry.

“Tanner might have some more hours for you in the bar if you’re desperate.” He points next door. “You can grunt at him. He’ll grunt back. Bam, more shifts.”

“Thanks, but I’m exaggerating.” Sort of. I place my drink on the counter and take off my jacket and scarf, stashing them so I can get to work.

I can’t say I thought working at a bookstore and wine bar would be my future when I was a kid, but it pays my bills. Mostly. It’s good for rent and food. There’s just no wiggle room for messed-up alternators.

“A shipment came in today, and because you’ve had a shitty morning, I’ll give you a choice between stocking the shelves or customer duty.”

“You could always do both.”

I tap my chin. Tough choice. “I’ll take customer duty. I’m trying this new thing where I think positively. If I pretend to be nice, it will eventually make me nice.”

“Fake it until you make it.” He slaps my shoulder. “Let me know how that works out for you.”

A customer walks through the doors.

Mrs. Embry is a regular. She’s in her seventies—at least—and I know exactly what she’ll ask for.

“I’ve run out of men who can’t find their shirts,” she says, as predicted.

She thinks she’s hilarious, and I have to admit, she is entertaining. She only reads romance novels with shirtless men on the covers, and she has to point it out every time.

“Right this way, Mrs. Embry.” I lead her to the romance section.

“I was talking to my online book club, and they recommended …” She glances around the store as if we’re being watched and then leans in and lowers her voice. “Something called MM romance.”

I purse my lips to stop from smiling. “We, uh, do have those books, but, umm, do you know what MM means?”

When I started working here, I had no clue.

She whispers, “It’s about the gays.”

It’s hard because her tone is so serious.

“We keep those books over here.”

We move toward the gay romance section, and her little face lights up. “Ooh, what’s better than one shirtless man on a cover but two?”

She reaches for a book, and my cheeks heat.

“I read all the books that come through the store.”

That’s a lie. I haven’t read every single book, but I make it a point to read this genre.

Both of my bosses are queer, and I work in queer spaces. I figured reading gay romance would give me insight into the LGBTQ community, seeing as I knew next to nothing when I started here. I was worried about saying something homophobic out of ignorance.

I’d never do it intentionally—anyone can love anyone they want—but I’ll admit to not being so aware when it comes to everything rainbow.

The books were definitely … eye-opening. I’ll leave it at that.

Mrs. Embry flips through the book, pausing to read a few paragraphs. “What’s a boy button?”