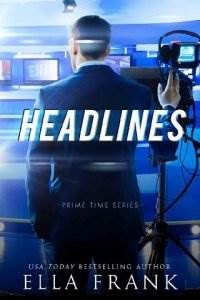 I glanced over to Nichols, who was seated in the passenger seat of my SUV tugging at the neck of his bulletproof vest. He’d been bitching and moaning from the second we’d pulled in behind a beat-up Cadillac to settle in for tonight’s takedown.

Me? I was dealing with the heat. Yeah, I was uncomfortable, but this was my first case since being cleared for duty, and even the prospect of a four- to five-hour stakeout hadn’t been enough to dampen my mood.

I was back on the job and it felt good. What would feel even better would be finally nailing the scumbag we were sitting here patiently—

“I swear, there’s sweat pooling in the crack of my ass.”

—or not so patiently waiting for.

“There better not be any of your bodily fluids on my car seat, Nichols, or you’re paying to get it detailed. Plus, the sun’s gone down. I’m sure it’ll start to cool off soon.”

It really had been a scorcher of a day. One of the hottest so far this month, and even though the windows were down, with no breeze, it was like sitting in a hot box.

“If it’s all the same to you, can we stop talking about your ass? It’s starting to feel a little too intimate, and I don’t want your wife chasing me down. She scares me.”

Nichols flipped me off, and I chuckled before returning my attention to the street up ahead. Dark, grimy, and unwelcoming, it wasn’t exactly the kind of place you’d want a loved one walking around in. It was, however, the perfect place to conduct the kind of shady transaction we were here tonight to intersect.

For the past week we’d been trailing one of Chicago’s top drug dealers and his brother. Vincent and Johnny Martinelli had been running one of South Side’s top crime rings for the past twenty years, and between the two of them, they had a rap sheet ten feet long.

From possession and prostitution to domestic battery and burglary, these two weren’t squeamish when it came to getting their hands dirty. But one thing Vincent had always drawn a line at was murder. He subcontracted out to take care of his dirty laundry, which was how he’d lasted so long. But tonight, that was going to end.

We’d gotten a tip from one of the local gang bangers looking to cut a deal on where old Vincent was about to lay down some serious cash in exchange for one of his problems disappearing.

Which brought me back to my sweaty situation with Nichols.

“As happy as I am to have you back”—Nichols brought a can of soda to his lips and took a sip—“keep your hands to yourself.”

I scoffed and was about to tell him he wasn’t my type when Jenkins—one of the other detectives on tonight’s detail—came over the radio.

“Got eyes on the suspects, but traffic interfered. They’re traveling down Washburn in a Crown Vic with an SUV in tow.”

I straightened in my seat, my adrenaline beginning to hum now as I waited for the cars to come into view. It’d be a real sweet welcome-back gift to myself to catch these two and finally get them off the streets, and as the boxy grille of the Crown Vic turned onto Twenty-Fifth Avenue, I tipped my head in its direction.

“That’s our guy,” I said as the car started our way. It crawled down the street, and as it approached the drop-off location, the headlights flicked off and it turned into an empty lot behind a repossessed apartment block.

Nichols shifted in his seat, going for the door. But I placed a hand on his shoulder, halting him.

“Wait. We wait for backup on this. These two don’t play.”

I grabbed the night binoculars and took a look at the now-stationary vehicles. The SUV blocked the Crown Vic for the most part, but when a black Lincoln pulled into the lot from the other side, my senses started to tingle.

Here we go. If our intel was on point, that would be Trevie, the banger they planned to contract out for the hit on Jay-Jay—a bookie turned snitch.

“Jenkins? We’ve got a black Lincoln coming in the east side of the lot, as expected. Should be Trevie. What’s your ETA?”

“Five to seven. Fucking car is broken down. It’s blocked the way.”

Shit. Oh well. I hoped these two had something to discuss before they got down to business.

When the Lincoln drew to a stop opposite the Crown Vic, the passenger door pushed open and Vincent climbed out. I cursed and lowered the binoculars.

“Fuck.” Jenkins’ little traffic holdup had put us in a bit of a bind.

No shit. I knew Nichols was right, but the idea of just the two of us against these assholes didn’t sit well. Not at all.