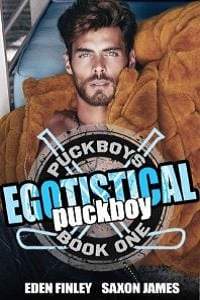 Your lifelong dream disappearing in front of your eyes isn’t supposed to happen so quickly. Three twenty-minute periods have never felt so short.

It’s game seven of what has been the longest series in history, because we’ve gone into overtime in every single game. Except this one. Because in the last few minutes of the third, there is absolutely no coming back from this disaster.

Philly might have the home advantage, but there’s no excuse for this shitshow. 6-1. Six to one. This is what it looks like when a team crumbles under pressure and loses their chance at even trying for the Cup.

Literal blood and sweat have been put into this season, and I’m about to add tears as well. Because as I watch Anton Hayes power toward me with a knowing I win smirk on his lips, it takes all my strength to only check him instead of doing what I really want to do, which is body slam him into the ice. What’s a five-minute major penalty and a twenty-thousand-dollar fine in the big scheme of things?

But I don’t. Because I’m professional and not a sore loser, and this game is already over.

Which is how we let another goal in before the final buzzer.

Okay, maybe I’m a bit of a sore loser.

Anton Hayes. What a walking douchecanoe.

I have no problem with ego. Hell, I probably rival every single guy for the crown of biggest ego in the NHL. But Hayes adds a whole new level of meaning to the word.

And coming from me, Mr. Egotistical Fuckboy, that says a lot.

Yet, people don’t see him for the asshole he really is.

Like right now, while we do the ceremonial shaking of hands after the game and he gets to me, there’s something condescending in the way he says “Good game.” It’s in his cocky smile, the one that calls me a “Loser” without him actually saying the word out loud.

I don’t give him the satisfaction of a response. He’s probably getting enough happiness from the smell of defeat that’s hanging around our team. It smells a lot like old gym socks and jockstraps.

Also, there’s no doubt in my mind that the cameras are on the two of us. Hayes and I have come head-to-head so many times on the ice I’ve lost count. Therefore, according to the media, we hate each other. People are told not to believe everything they read, but in this case, they should. Because it’s absolutely true.

In the locker room, our coaches don’t even bother with the “We’ll get ’em next season” speech. It’s the end of our year, and we’re in mourning.

“You gonna shave that mess off your face now?” Diedrich nods toward my playoff beard, which is nowhere near as bad as some of the other players’.

“Dunno. Guys love it.” I run my hand over the coarse hair on my chin, and it’s all wet from perspiration. Yeah, I’m going to have to at least trim it. “They like it when it scrapes along their—”

Diedrich holds up his hand. “Got it.”

The guys are cool with me being an out and proud player but get all weirded out when I go into details. Granted, I probably overshare way more than I should, but when I pointed out I had to listen to them talk about their hookups with puck bunnies, suddenly the entire team became stand-up dudes who speak respectfully about women in locker rooms.

Funny how that works.

Apparently, the cure to toxic masculinity is to show them how it feels to be talked about like a piece of meat.

The team ends up going to a bar in South Philadelphia to drown our sorrows, but we’re all so depressed it doesn’t take long for us to split up. Some guys go to another bar, others make their way into the back where there are pool tables, but I choose to perch my ass on a barstool and order drink after drink until the loss doesn’t sting anymore.

There might not be enough alcohol in the world to make that happen.

Two more series and the Cup would’ve been ours. So close yet so far.

Wagner, one of my teammates, slaps me on the shoulder. “We’re heading out. You wanna come?”

I wave him off. “Insert innuendo about coming here.”

“Hey, look at it this way. You’re still a baby. For old fucks like me, we haven’t got long left.”

He says that like he’s forty when he’s a whopping thirty-four. That’s what this career is like. You’re considered old when regular people your age are in their prime.

I wouldn’t consider myself a baby. At twenty-seven, I’ve been in the NHL for four seasons now. I grew up through the juniors and moved to the AHL after being drafted, so I’ve been playing my whole life, but the average career in hockey is five years. Five. Just ask my father—that’s how long he lasted.