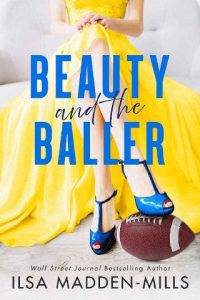 “Hey, didn’t you once buy some poster of Star Wars for like . . . twenty grand?” Tuck asks as he plops down next to me where I’m alone at a table for eight. It’s after dinner, and most of the players have wandered off to dance with their partners.

“I have two, The Phantom Menace and The Last Jedi. Why do you ask?” I say, then drain my fourth or fifth whiskey, embracing the burn of the bourbon. The room isn’t spinning yet, which means I’ll need more. It takes a lot to forget that my NFL career is over, my fiancée gone.

I focus back on Tuck, faking normal. “Yeah, sure.”

He grins. “Good. Your perfect woman just walked into our party. Like a gift from heaven. We must make a plan.”

“I hear your sarcasm, but come on, would I lie to my best friend?”

He says something else, probably some wisecrack, but I miss it when a woman laughs in the ballroom, light and airy. I close my eyes, inhaling a sharp breath. For a second, she sounded like Whitney. See, the body can be numb, but little things trickle in and haunt me. And football? Not playing cuts like a razor blade, sharp and vicious. I can barely breathe when my team takes the field without me.

I signal the server for another drink.

The waiter gives me a nod, pours it, and then rushes over and hands it to me. I take a hearty sip under Tuck’s gaze.

“You never used to drink, Ronan. Don’t you think you’ve had enough?”

Ha. This is nothing compared to those mornings when I wake up and can’t recall details from the night before. “The girl? What’s it about her that makes her perfect for me?”

“Look for yourself,” he says, nudging his head toward where she must be. “You won’t believe what she’s wearing. Behind you and to your left. Check it.”

With a heavy exhale, I loosen my tie and swivel in my seat and peer around various players. I focus in on the girl about twenty feet away and inhale as I get the full effect.

There’s no way anyone could miss her. Not with that getup.

What the hell was she thinking?

Tall with pale-blonde hair, she’s wearing a costume, legit, like Princess Leia—slave-girl version, the one where she was captured by Jabba the Hutt. It’s a gold bikini with a red filmy loincloth over her hips. She’s even got the sleek plaited high ponytail and golden knotted necklace. From the metal snake cuff around her upper arm to the green lace-up boots, the costume isn’t one of those cheap knockoffs from a Halloween store. It’s damn perfect, and she wears it better than Carrie Fisher did in Return of the Jedi.

A low whistle comes from Tuck. “She waltzed in the fanciest hotel in the city and crashed a Pythons party. Right in the middle of all these suits and dresses. Everyone’s staring at her. Wait a minute . . . looks like someone isn’t happy . . .”

His voice trails off as a black-clad security guy approaches her, clipboard in hand, headset on his head. A scowl settles on his face as he snaps out words to her. Security is tight at our events. Fans, crazy ones, will do anything to get a glimpse of their favorite team.

She doesn’t look like a weirdo fan. Those are usually wearing black-and-gold Python gear and shouting players’ names.

Tuck lowers his voice. “She’s about to get thrown out—or arrested. They’ve done it before. She needs a Han Solo to save her.”

He shrugs. “She’s your type—into Star Wars, blonde, and a damsel in distress.”

I lean back in the chair and shake my head at him. Before I got serious with Whitney, we used to compete at bars to see who could get the most numbers. Jesus. That feels like a million years ago.

“You wanna play that, huh?” I ask. “Is this you trying to motivate me to move on?”

“The wreck,” I finish, my voice thickening. “The anniversary of her passing is in four days.”

“I’m sorry.” He sighs and glances away, then comes back to me, leaning his arms in on the table, an earnest expression on his face. “Look. I miss you, okay? Dammit. I sound like a silly schoolgirl. It’s just . . . you’re avoiding me, your best friend. You’re drinking. A lot.” He rakes a hand through his messy sandy-brown hair and sighs. “I’m sorry, man. This isn’t about me, and I’ve got no clue what you’re going through, and Whitney, the way it went down—it sucks . . .”